I thoroughly enjoy food in all aspects. I love shopping for it, I love cooking, and I love eating. Although I usually cook using knowledge and theory that’s been ingrained into me over the last twenty odd years, I don’t mind cracking open a cook book every once in a while to try something someone else has perfected. After this week’s Biblio-Mat book, I will probably not be as trusting of cookbooks anymore.

Written in 1951 by Sara M. Jordan, M.D. and Sheila Hibben, Good Food for Bad Stomachs is supposedly a cookbook for people with sensitive stomachs, particularly those prone to ulcers. At 243 pages long, it contained five hundred recipes “carefully selected” under consultation from a doctor. Coming into this, I had assumed that it would be five hundred different ways to boil chicken and vegetables. I was wrong.

The recipes in the book were essentially a list of ingredients and short paragraph descriptions on how to turn those ingredients into proper meals. As you imagine, they are not very informative. What is more interesting, though, is that a good deal of these recipes calls for heavy cream and almost all of them use at least a tablespoon of butter. There were a grand total of eight beef recipes in the entire book, but twenty pages worth of seafood dishes, including ten recipes on oyster alone. It also had a recipe for beef tea.

If that doesn’t make you question the viability of this book in helping those with sensitive stomachs, ninety of the two hundred odd pages were recipes on desserts. If I had any enemies who suffered from chronic stomach pain, this book would find its way to their doorsteps.

Nevertheless, I decided to try some of these recipes out, for if I’m to criticize something, I should probably suffer through it first. Of the recipes, I chose two that seemed the simplest to make with what I had in the fridge: the borsch and the beef stroganoff.

The borsch was a fairly straight forward recipe. I knew how to make consommé already so that was half the battle. Once again, I was fairly puzzled by the inclusion of butter and sour cream, but seeing how my stomach is pretty much a cast iron bottomless pit, I was willing to let it slide. The only thing that threw me off was the step of straining the potatoes. I had never heard of this phrase and assume it means to push it through the sieve as a search on Google on “straining potatoes” just lead to random euphemisms about relieving oneself.

The beef stroganoff was a bit trickier as it called for smashing the meat into thin steaks. It also called for a double boiler, which in this case meant balancing a small pot inside a bigger one and praying that the Ikea handle didn’t melt. Stoves in the 50’s apparently only had an on and off switch as none of the recipes in this book referenced what type of heat you were supposed to cook on. Since there were no suggestions on what to put the stroganoff on, I choose quinoa as I did not have any noodles on hand and I don’t believe in rice. 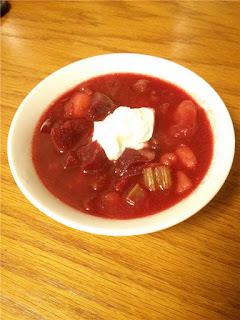 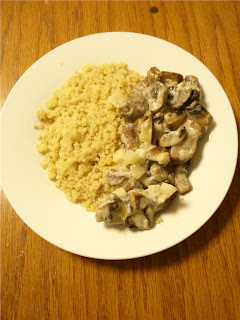 The finished result was mediocre but acceptable. The borsch came out well, but then again it’s fairly difficult to go wrong on vegetable soups. The mushroom sauce on the stroganoff tasted like a slightly less processed version of Campbell’s cream of mushroom soup and outside the taste of salt, the beef stroganoff itself was a bit bland and seemed to lack the beef flavor one would expect from, well, beef. Must not have pounded it enough.

Things I learned about cooking in the 50’s:
- People loved to pound their meat with mallets
- Butter was pretty much a food group
- Boiled lemon juice was a common ingredient
- Don’t trust chefs from this era

Also, I ended up making the beef tea:
No, I did not drink it.

Book rating: 5/10 (Pictures would have been nice)

Random quote: “Now meringue glacée has a French name, which is bad, and it is an ornamental concoction, which is bad. It sounds and looks evil. The meringue constituents of it look, in fact, almost as evil as a couple of macaroons, which are made of almonds, which are oily, and hence evil.” (Butter, though, is like the best friend that keeps lending you money)
Posted by Vincent Lui at 11:57 PM

Email ThisBlogThis!Share to TwitterShare to FacebookShare to Pinterest
Labels: biblio-mat, cooking, hands on