For those who prefer to browse the Monkey's Paw by candlelight, October 9th promises to be rich on atmosphere. As part of Vintage Crawl Toronto, we'll be extending our melancholic brand of hospitality to visitors until 11pm. Also, since we installed the legendary Biblio-Mat at this same event just two short years ago, we're treating the evening as a celebratory Tooniversary for our eccentric vending machine. (Is that the smell of birthday cupcakes, or is it just book dust?) Expect a cameo appearance by Biblio-Mat designer Craig Small, and audio wallpaper by our in-house musicologist DJ Anachronistik, who will spin some very scratchy grooves on a century-old Edison cylinder player. 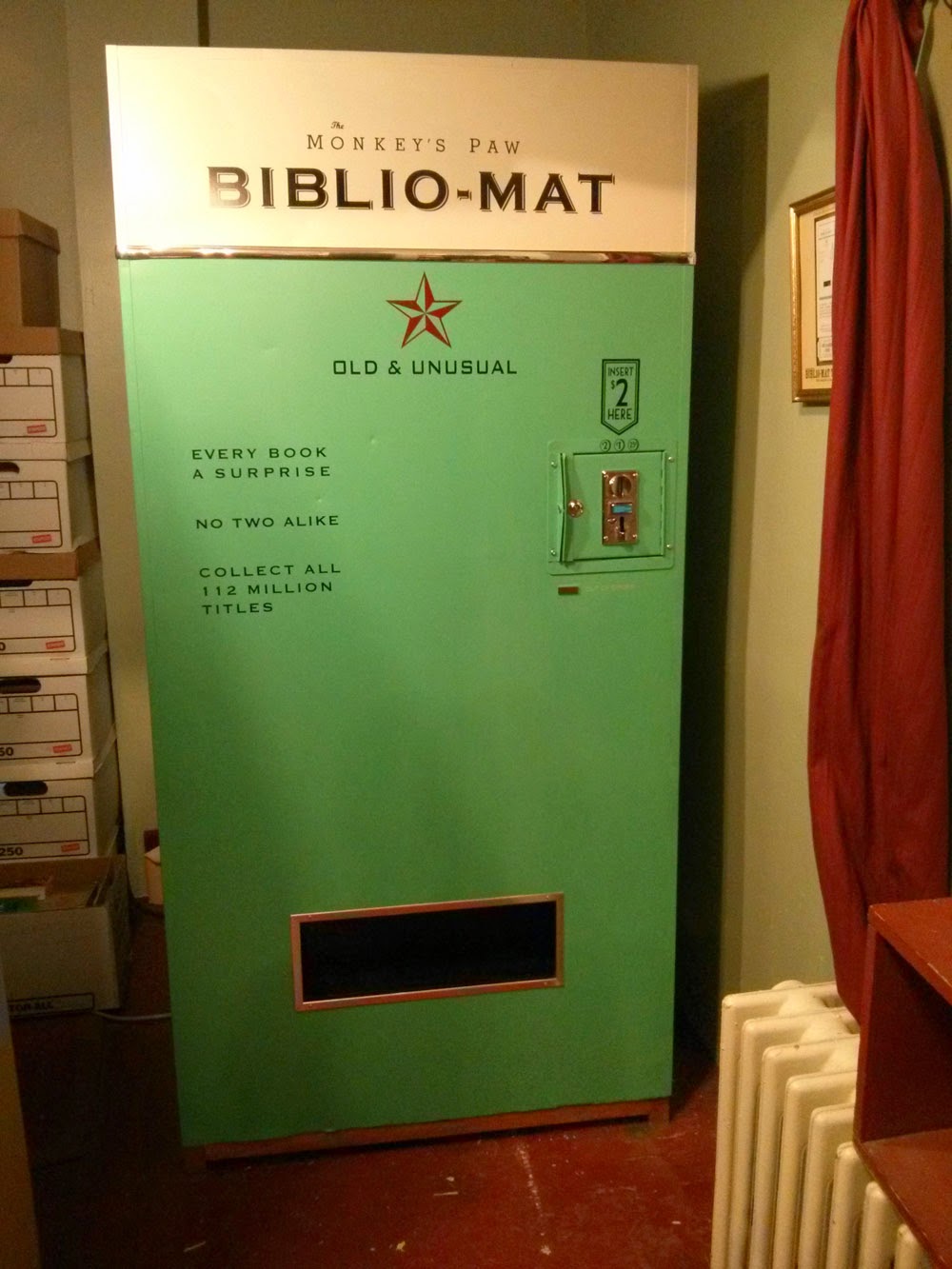 A birthday party for the most interesting machine in Toronto? Count me in!
Posted by Vincent Lui at 10:49 PM No comments:

S23: Tillicums of the Trail

For the most part, this Biblio-Mat offering looks like a run of the mill turn of the century Canadian exploration book, and it is. However, it does contain a nice little morsel of history within its pages.

Title: Tillicums of the Trail

Written by George C. F. Pringle and published in 1922, Tillicums of the Trail looks and feels like a book that’s nearing a hundred years old. With 253 faded acid-washed pages sandwiched between burnt orange cloth covers, it begs to be written off as another one of those books that are old enough to garner some sort of respect, but not interesting enough to actually pick up. That is, until you open it.

After a certain incident, I try to stay as far away from any books with “Trail” in the title but this one did pique my curiosity in that I had no idea what a Tillicum was outside of the name of one of the orcas in Blackfish. Looking it up, it turns out Tillicum is a Chinook word meaning people/family/tribe. Interesting, but not interesting enough to actually spend time reading through it for me.

What I did notice opening the book off the bat was that there is a water stain on the inside cover that bled through the first thirty pages, creating a gorgeous ring design that will no doubt be appropriated for one of my future design projects.

The second, even more fascinating, thing I discovered is that the book is signed by the author and given away with an inscription on the inside cover.

The handwriting is as you would expect from a writer and it appears to say:


For the sake of his good Scotish name and in appreciation of a kind(?) reception at the N. P. Cover(?) in Sept. 1923 with the author’s compliments.

Inscriptions are always a fun find but ones written by the author seem to add so much more value to the book as a piece of history. Interesting for sure, but still probably won’t read it.
Posted by Vincent Lui at 11:21 PM No comments:

Browsing through the Monkey’s Paw I found an amazing edition of a somewhat understated book:


Kipps is an understated book in the sense that it is a fantastic social drama that was greatly over shadowed by the reputation of its author – H. G. Wells. Yep, the sci-fi writer that shook up the genre with War of the Worlds, The Time Machine, The Invisible Man, and the like.

Being at the forefront of science fiction and releasing a dramatic critique on society went as well as could be imagined. However, over the years more and more people have warmed up to it.

This particular edition is from the 50’s and published by Collins is a very nice leatherbound slipcase. The 380 pages contain the three parts of the story that follows the eponymous Artie Kipps as he rises up through society and I would say it’s a fairly biting portrayal of the social classes at the time.

While it’s a huge departure from what Wells is mainly known for, it’s a good read and highly recommended if you ever come across it.
Posted by Vincent Lui at 11:55 PM No comments:

Email ThisBlogThis!Share to TwitterShare to FacebookShare to Pinterest
Labels: awesome

The Biblio-Mat has been going in and out of commission for the past month or so but luckily it was back to running order right as I got to the Monkey’s Paw this week. Can’t help but feel it’s a little happy to see me, though.

Novels are fairly uncommon offerings from the Biblio-Mat and novels with a nude woman holding a sword is even rarer. Written by Jack Oleck and published in 1959, the 307 acid-washed pages have faded into a burnt yellow, making it look much older than its age.

The book itself is pretty tame, having no illustrations or fancy script work. However, the end flaps are actually pretty amusing.

It also seems to romanticize and re-imagine life during Imperial Rome, which doesn’t sound too appealing, until you bring Caligula into play.

Might be worth reading just to see how Oleck unravels the ruling class.
Posted by Vincent Lui at 11:29 PM No comments: