A lot of books pique my interest with just the title but this week’s book title created an enigma that gnawed away at me until I finally flipped it open.

Was this a book on learning a second language or a book for people for whom English was a second language? Or perhaps the second volume in a series of books about language? Second edition? What was an “Aldine”? That and more questions were left unanswered because the book does not explain the title at all, only that it’s an important text for students.


Written by Catherine T. Bryce and Frank E. Spaulding, Aldine Second Language Book was published in 1914 and has survived amazingly well considering it’s a century old. The binding is remarkably tight, and the 328 pages are crisp and white. Considering it is a grammar and language textbook for grades five and six, presumably more than a few students failed the exams miserably as the book looks like it has never been opened.

Usually I’m not a fan of textbooks, but the Aldine Second Language Book turned out to be pretty entertaining and actually quite useful. It contains hundreds of short stories and fables that are used as examples for lessons on composition and structure. Some are amusing, others just go nowhere. There’s even a section teaching students how to write a proper invitation letter, an art that is definitely lost in this texting age.


Breaking down all the basic components of the English language, it did remind me on many rules that people generally don’t follow anymore, either due to stylistic choice or incorrect usage that has been accepted as commonplace. It’s interesting to see how language evolves, even in a short period of time.

Funny enough, the book also has a section on story composition that I might end up working on for fun. Chapter twenty-two contains half-finished stories as exercises for students to finish, but what’s interesting about them is that they all seem to be horror stories.


All in all a fun read, even with the lack of explanation on the title. Seriously, why is this a ‘second language’ book? The need to know is going to gnaw at me for a long while.
Posted by Vincent Lui at 11:57 PM 2 comments:

S20: Treasures in Truck and Trash

Frequenting The Monkey’s Paw and the Biblio-Mat as much as I do, I have developed a large collection of old books. At times I worry that I might be straying into hoarder territory, other times this type of book pops up and makes me wonder if I need to buy more things:

Title: Treasures in Truck and Trash

Written in 1949 by Morgan Towne, Treasures in Truck and Trash is essentially a guidebook on finding buried treasure in things people throw away. Pretty much Storage Wars in the 40’s, with less item planting (probably). While the book itself looks like it’s been through a trash compactor, it turned out to be a pretty entertaining read.

After the book-a-week project ended last year, I rarely read through the new Biblio-Mat books I get, mainly because I’m a year older and 52 weeks of random books wiser. However, I actually read most of this book in one sitting without meaning to.

Beginning with stories of people finding rare and expensive items amidst garbage, it’s meant to build up peoples’ sense of adventure and invoke the spirit of treasure hunting. That, paired with the light-hearted prose, made it actually a lot more enjoyable than what the cover implied. Broken up into short chapters focusing on random types of collectibles, the anecdotes were fast paced enough to keep it interesting.


Having a father who collected antiques and art, I’ve seen some of these situations unfold in real life more than a few times when things he bought for a couple of dollars at a garage sale turned out to be worth thousands.

Conversely, I’ve also seen the other side of the coin where he’s picked up things that were worth a lot less than what he paid. And I guess that is the danger of buying into the glamour of Storage Wars, Junk Brothers, Pawn Stars, and even the Antiques Roadshow – they only show the exciting 1% of the time treasure hunting pays off and gloss over the 99% of the time where it’s actually a disappointment.

Email ThisBlogThis!Share to TwitterShare to FacebookShare to Pinterest
Labels: 2014, biblio-mat

It’s no secret that I’m a huge Oscar Wilde fan and I usually go out of my way to pick up interesting copies of his work. As you can imagine, I own a lot of different versions of his books. Last week, though, was the first time I’ve ever picked up a duplicate book – Oscar Wilde’s Salome:


Years and years ago when I was first getting into book collecting I came across a copy of this and fell in love with it. Published in 1945 by the Heritage Press, it was a thin slipcased black book that opened into vivid gold and orange. When I saw a copy at the Monkey’s Paw with the original wax paper wrapping, I picked it up in a heartbeat.


Translated by Lord Alfred Douglas, the 51 pages are a quick retelling of the Salome and Herod story in play form. The illustrations are stated to be decorated and hand-illuminated by Valenti Angelo, which pretty much just means someone re-inked the lines and added highlights in gold ink to make the images pop. Gorgeous? Yes. Done by one guy? Probably not.

What’s more intriguing is that the pages are printed on a broadsheet then folded into the book instead of being cut. This leaves an interesting double paged feel to the pages, adding the decadence of the book.


Also of note is that this particular copy bears an an ex-libris plate of being from the library of William Albin Herold.


Could not find any information on this gentleman outside of an obituary in Toronto, but he must have been an interesting man to his own bookplate done up.
Posted by Vincent Lui at 11:58 PM No comments:

S19: Escape to the West Indies

August long weekend means cottage country and trips to water bodies. This week’s Biblio-Mat book falls along the same lines of just getting away from it all: 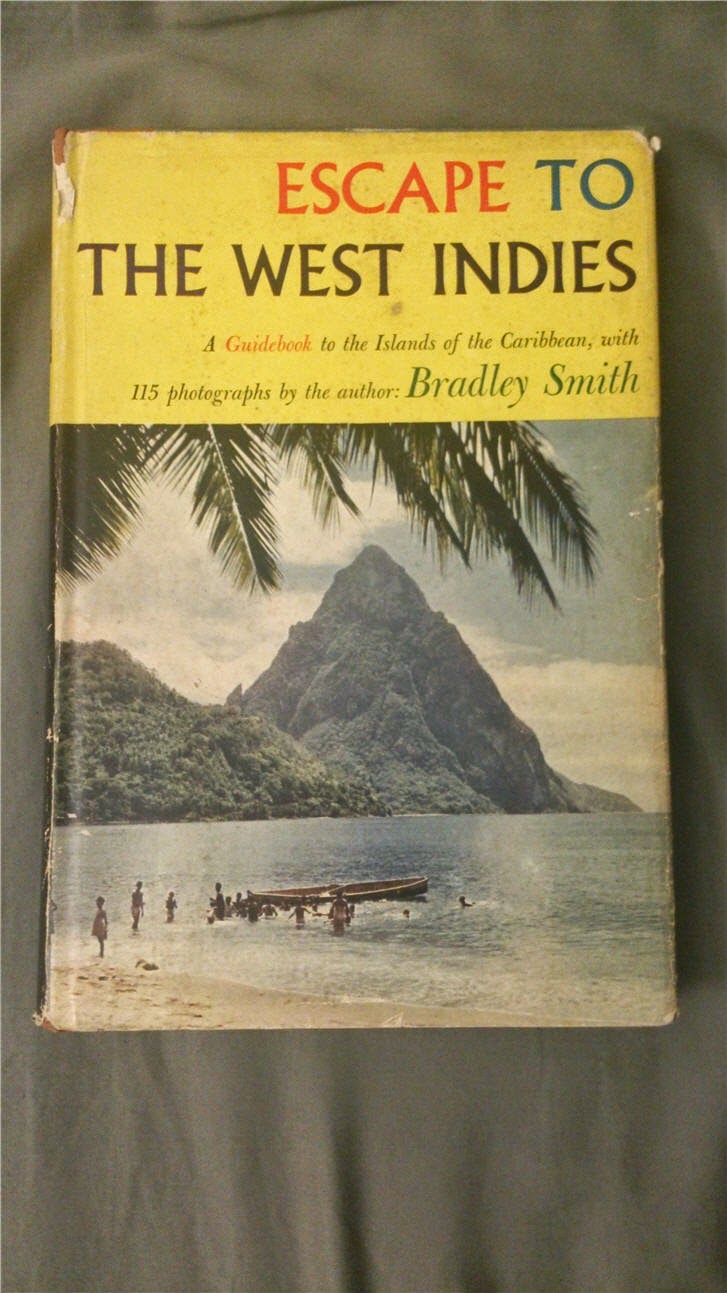 Title: Escape to the West Indies

Witten by Bradley Smith and published in 1959, it’s an interesting look at a relatively unspoiled paradise. Each regional chapter begins with population and geography information that is definitely dated now but still fun to flip through. 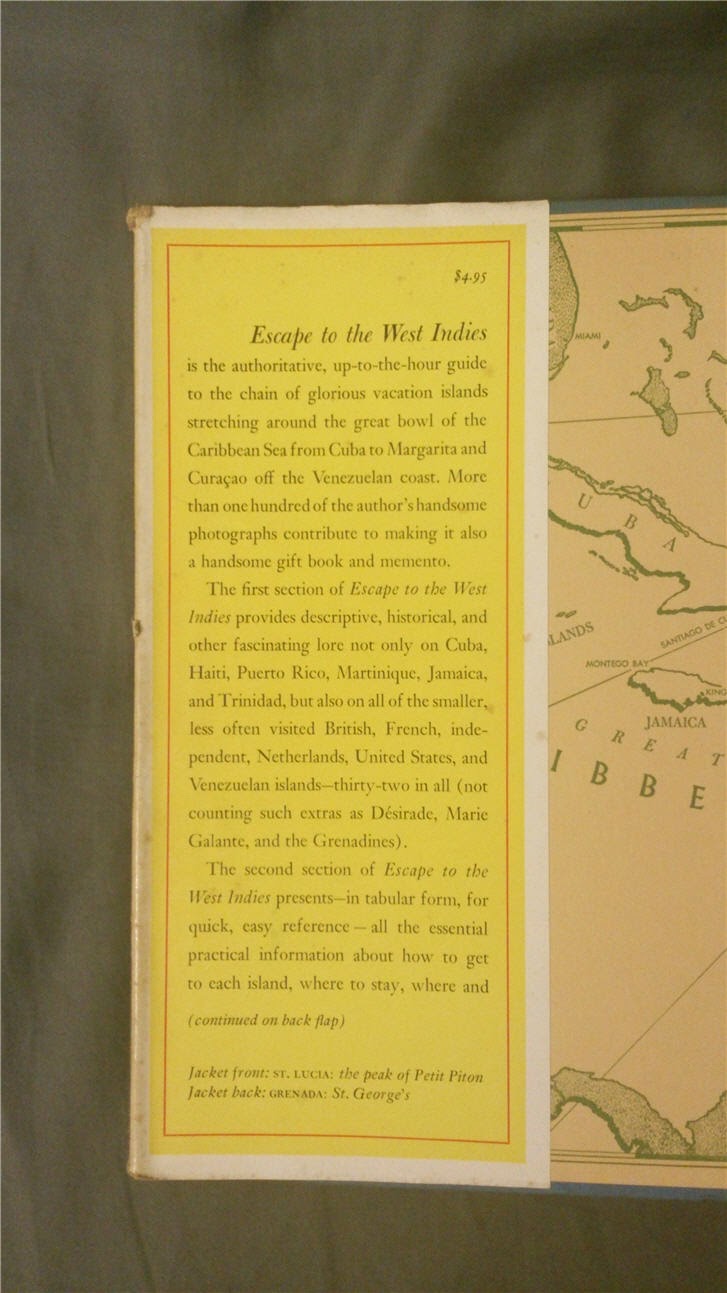 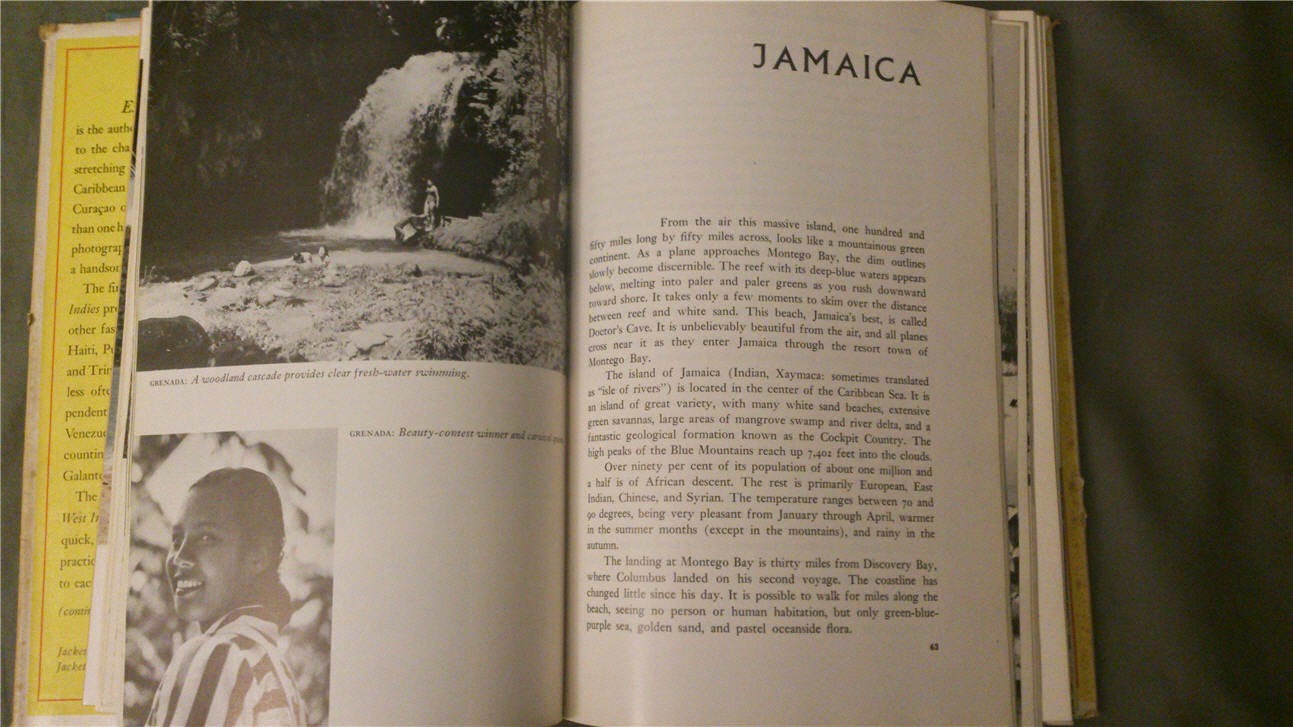 A hundred and fifteen photographs accompany the text, showing a good variety of people, architecture, and the sheer beauty of the land and seascape. 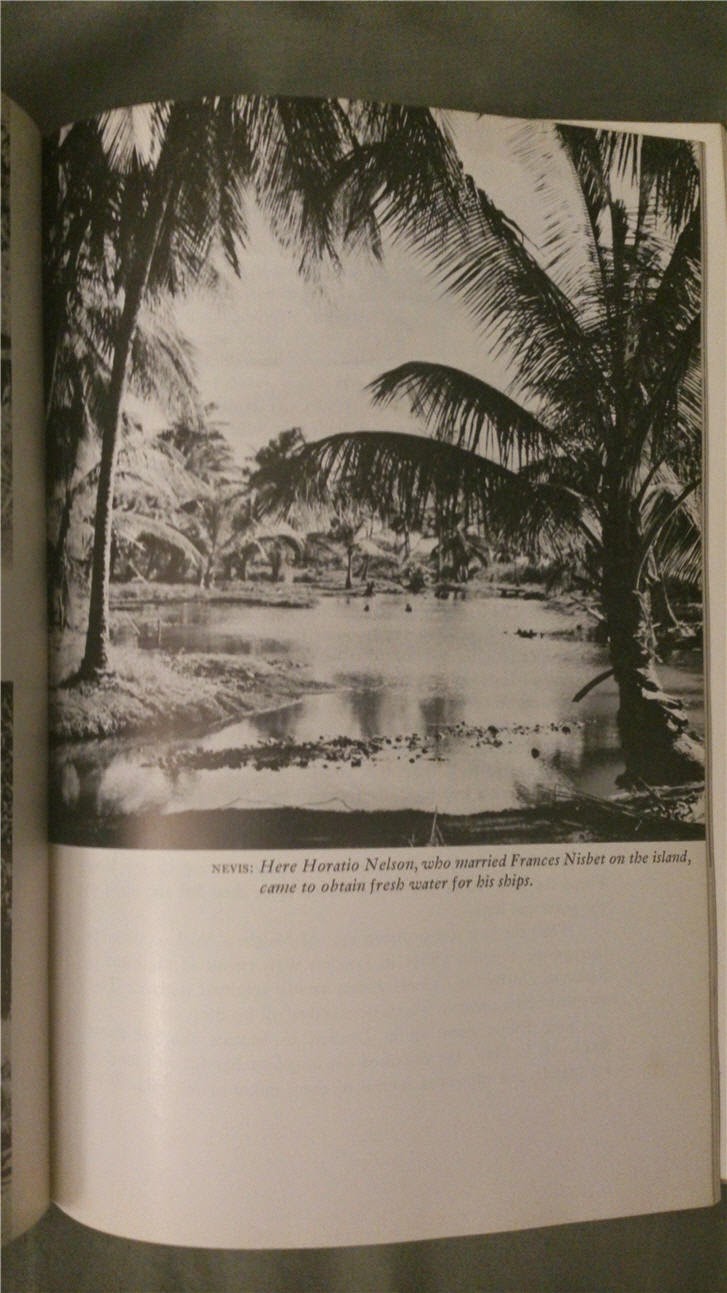 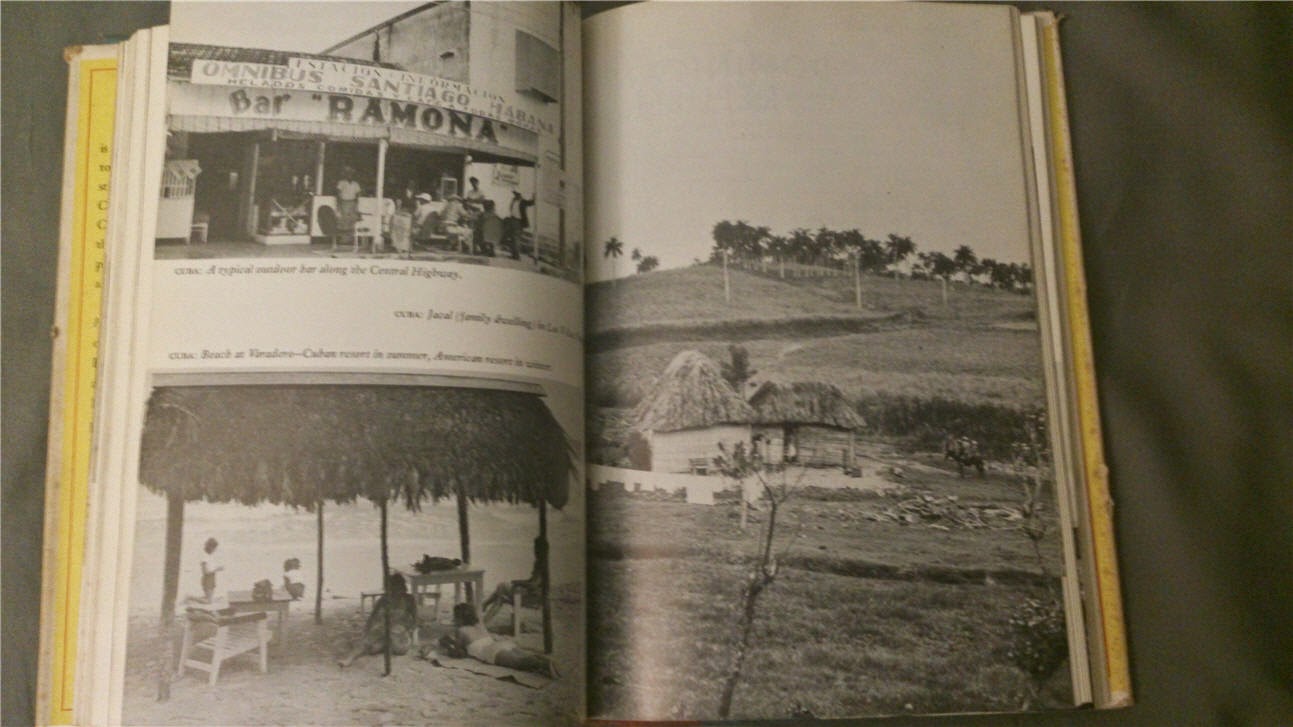 Unfortunately the photographs are in black and white, which doesn’t capture the vividness of Caribbean water, but empty beaches bereft of resorts and tourists make up for it.
Posted by Vincent Lui at 11:52 PM No comments: